A New Year of Legislating

A New Year of Legislating 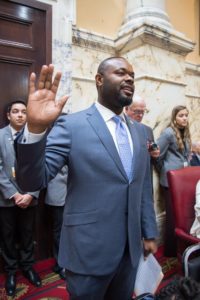 After many months of preparation, I was sworn in as the 45th District’s Senator on January 9. Since that time, #TeamMcCray has been at work—in Baltimore and Annapolis—on making a smooth transition and beginning to lay out our legislative agenda for the 2019 session.

Prior to Day 1, we had the opportunity to celebrate with family, friends, and neighbors at a pre-session reception hosted at the Great Blacks in Wax Museum. Thank you to everyone who was able to make it.

Returning to the State House
The first day of the new session was incredibly busy. I began the morning by sitting down with C4 on WBAL 1090 for a discussion about the year to come. After that, I joined Chairman Barnes and members of Maryland’s Legislative Black Caucus for a press conference supporting the “Fight for $15” initiative. And, of course, I was humbled to officially be sworn-in as a Maryland Senator. Thank you to all of those who joined us!

State Solutions for Public Safety
Recently, I published an article for The AFRO, in which I laid out a few ways that the Maryland General Assembly can act to improve the state of public safety in the City of Baltimore. In particular, I included the need for mandatory reporting of expenditures for long-term crime prevention solutions, updating the police districts in the city and beginning to conduct independent legislative audits of the department. You can read the full op-ed here.

Making Headlines
Finally, we’re proud that the work we have been doing has caught the attention of a number of leading news outlets. We’ve been included in The Daily Record’s “Top 10 to Watch,” the Washington Post’s “Meet the freshman class,” the Baltimore Sun’s “Fresh faces of power in Annapolis,” and Maryland Matters’ “Six Freshman Senators to Watch.”