One of the best parts about the month of November is that it always serves as a reminder to reflect on what we have to be thankful for. Whether it’s time spent with family and friends, recent accomplishments, or new opportunities on the horizon, we all should take more time throughout the year to step back and recognize the blessings that surround us on a daily basis. 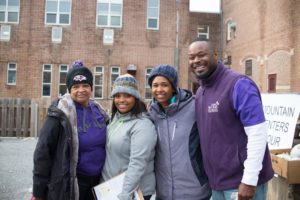 Among the things I am thankful for was the opportunity to once again partner with the Keystone Mountain Lakes Carpenters to give away 300 turkeys to neighbors throughout the 45th District. This marks the third year in a row that we have teamed up in advance of the Thanksgiving holiday.

Election Day Successes
Continuing on the theme of giving thanks, I am appreciative of everyone who came out to the polls on Election Day to help us reach the finish line in the general election. I spent a lot of time working the Early Voting locations and enjoyed meeting and reconnecting with all of the neighbors who early voted.

With the election now in the rearview mirror, I am looking forward to getting down to work in the upcoming legislative session and collaborating with Delegates Talmadge Branch and Cheryl Glenn, who were successful in their respective re-election efforts, as well as Delegate-elect Stephanie Smith – each of whom will be representing the 45th District in Annapolis.

Investing in the Future
I was proud to join Dr. Bhutta and our recently re-elected Attorney General, Brian Frosh, for a discussion at the University of Maryland Medical Center on toy safety. Especially as we head into the winter holidays, it’s important for policymakers and families to consider the importance of requiring high standards for toy manufacturers so that our children are only playing with safe products. I encourage you to read the Maryland Public Interest Research Group’s full report here.

In recognition of American Education Week, I spent some time at Hamilton Elementary-Middle School, AFYA Public Charter School, and the Stadium School. I also dropped by Henderson Hopkins to speak with the sixth grade students about civic involvement. It was also a great honor to speak at the Senior Inauguration at the Baltimore New Era Academy, where I discussed the potential for greatness and the importance of giving back. The investment that we place in our young people today will pay tenfold in the future, and it was my pleasure to talk with the young men and women who one day will be leading our City and State.

Getting Out in the Community
It was great to be a part of community meetings this month in Frankford Belair-Edison, New Broadway East, and Mount Vernon. Our communities are made stronger by having engaged neighbors who are invested in their neighborhoods and I enjoyed speaking to those who came out.

***
Finally, on a personal note, it was an honor to be recognized in the International Brotherhood of Electrical Worker’s The Electrical Worker as one of the “IBEW Members Leading The Charge for Change.”