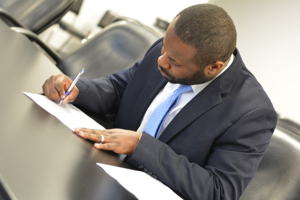 Baltimore, MD (February 19, 2014)— Today, Cory V. McCray, a Democrat who resides in the Overlea community, officially filed his certificate of candidacy for Maryland delegate with the State Board of Elections.

“After meeting and engaging with thousands of people from every part of the district over the past several months, I am incredibly encouraged that the residents of Baltimore—particularly those of the 45th District—are ready for a different approach to make our City better,” said McCray.

McCray and a group of loyal supporters, dubbed “Team McCray,” began canvassing the 45th Legislative District in June 2013. While many questioned his rationale for launching his campaign a year before the election, McCray realized that he could not set out to represent the residents of East and Northeast Baltimore without hearing from them. Therefore, he kicked off the “Listening Tour” and became known as “A Leader Who Listens.”

Over the past several months, Team McCray canvassed all 58 precincts of the 45th Legislative District, knocked on more than 8,000 doors and engaged with nearly 10,500 of his neighbors. Running a grassroots campaign, McCray secured the support of nearly 300 individual donors, whose contributions ranged from $5 to $100. In January, Friends of Cory McCray reported a campaign finance account of more than $40,000.

After completing his first round of the “Listening Tour” in late December 2013, McCray began his second round in the new year, consistently knocking on doors, attending community meetings and hearing from voters whenever he gets a chance.

“As I meet voters, the one concern that continues to surface is the need for new leadership,” McCray continued. “Folks are ready for a fresh perspective. They want to make sure Baltimore educators have the resources they need to teach and our youth receive the support they need to ensure their success. Voters want state representatives who will advocate for new employment opportunities and support small businesses. They want leaders who work tirelessly to make Baltimore a safer place by focusing on serious crime and helping ex-offenders to seamlessly re-enter society.”

McCray resigned from the Baltimore City Board of Elections in May 2013 after serving on the board for two years. In 2012, McCray helped establish the B.E.S.T. Democratic Club, an organization that aims to empower the new generation of young voters to participate in the electoral process by bringing the political conversation back to the community.

A native of Baltimore City, McCray is a graduate of the Baltimore City Public School System and has been a successful small real estate business owner since he was 21-years old. Against all odds, by the age of 25, he completed a five-year apprenticeship program with the International Brotherhood of Electrical Workers (IBEW), where he currently serves as an organizer. In 2013, McCray graduated from the National Labor College with a Bachelor of Arts degree in Business Administration.

Cory McCray is married to Demetria, an elementary school teacher. Together, they have two daughters, Kennedy and Reagan, and are expecting their third child in March.

A Part of the Solution

Voting, Recent Updates, and More — Open for Your July Newsletter!

Voting, Recent Updates, and More -- Open for Your July Newsletter!