Baltimore, MD (October 28, 2013) – This weekend, the Maryland State and District of Columbia AFL-CIO endorsed Cory V. McCray for his candidacy in the House of Delegates in the 2014 Primary Election. McCray, candidate for the 45th Legislative District, was the only non-incumbent Maryland candidate to receive the early endorsement from the largest federation of labor unions.

“Having the early support of the AFL-CIO, which represents over 150,000 working class families and the core values of strong neighborhoods, confirms that our campaign has built a solid foundation and is headed in the right direction,” said McCray.

McCray is a vocal advocate for working families, who is committed to ensuring that everyone make a living wage and have the opportunity to secure respectable retirements and affordable healthcare. He represents new leadership that will fight for safer streets, better schools, stronger small businesses and more jobs in East and Northeast Baltimore.

The AFL-CIO endorsement is the result of the hard work of concerned residents ready for “A Leader Who Listens” to their needs and will represent their interests in the Maryland General Assembly.

In addition to the hard work, the AFL-CIO has recognized the McCray for Delegate campaign for running one of the strongest campaigns in the State of Maryland’s 2014 election cycle. Each week, the McCray campaign works harder than the week before, gaining traction and building momentum.

Running an extremely competitive grassroots movement, the McCray campaign has already knocked on more than 5,000 doors and engaged more than 6,500 residents in the 45th District since June. For this reason, McCray was the only non-incumbent/challenger campaign in the Baltimore metropolitan to receive an early AFL-CIO endorsement.

McCray officially launched his campaign in June with his campaign website, www.electcorymccray.com. Since then, he and his team of supporters have canvassed numerous neighborhoods within the 45th Legislative District, knocking on doors and listening to concerned residents every weekend.

Having recently stepped down from the Baltimore City Board of Elections, McCray is an organizer for the International Brotherhood of Electrical Workers (IBEW) and founder of B.E.S.T. Democratic Club.

Our April 2021 Report from the Session in Annapolis

Our Success in Annapolis this March 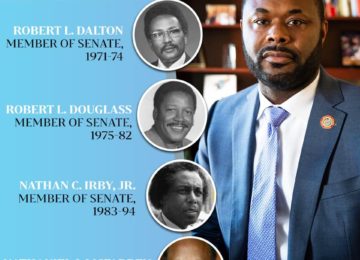 Our Work in Annapolis this February

Our April 2021 Report from the Session in Annapolis

Our Success in Annapolis this March

Our Work in Annapolis this February